Khanyisile Mbau is human like all of us. Some of us love attention and some of us don’t. Whether we love it or not and whatever we think or what the media says, she is being herself. While journalists write negative comments about her, she’s out there having the time of her life.

Even if she’s messing up her life, marriage(s) and future. Its her life. She’s got the paparazzi and celeb-watchers wrapped around those blinged-up fingers, thanks to her outspoken diva attitude. But you know what? It works for her and we love to hate her.

Even though it’s been a while since she sizzled up the small screen, people are still talking about her stint in Muvhango. You could say Khanyi exploited her fame as an actress to launch her media career.
****************************************Khanyisile Mbau needs no special introduction in the South African entertainment industry. She took over from the late Lindiwe Chibi as the legendary Doobsie in Muvhango and got fired after being with the show for only a few months, then she started a steamy romance with enterpeneur Mandla Mthembu. 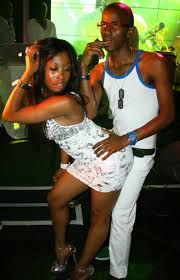 Mthembu, chairman of Martial Eagle Investments, is estimated to be worth about R2.5-billion. The Sunday Times and Sowetan featured letters from people criticising Khanyisile calling her a gold digger, saying she flaunted what she has in an article about her 600 pairs of shoes and seven cars – one for every day of the week.

She also played the role of Mbali in the SABC1 soapie Mzansi (season two). In 2007 she played the role of Zee in the mini-series After Nine. Mbau was born and raised by a single mom in Mofolo, Soweto. Her father was in the taxi industry and never at home, according to Mbau.

Theunis Crous takes away the keys of the BMW Khanyi Mbau had been zooming around in. Inset: Businessman Theunis.
The black BMW Z4 stops, the driver’s face hidden behind large fashionable sunglasses. Socialite KHANYI MBAU (24) gets out and tries to sweet-talk her married lover, construction tycoon THEUNIS CROUS (51).
Theunis is clearly angry – she disappeared three days ago. He reaches into the car and grabs the keys from her, yelling and cursing.
We’re witnessing the latest drama in Khanyi’s life.
Theunis moved to Gauteng from Port Elizabeth with his wife and business partner, Primrose, and their two young children 18 months ago to be closer to the government. He has powerful ANC connections and the government gives his construction company most of its business.
But his marriage is at risk after he moved out of the family home in Dainfern, Joburg, and into a R10 000-a-month love nest in Hyde Park with Khanyi. He bought the BMW for her.
“I don’t want to throw dirt on her,” Theunis says later, after a screaming match that seemed to have ended their relationship. “During the affair everything was good. I’m a man and she’s a beautiful woman – who would not want to be with her?
“But when you get to know her you realise she doesn’t like men. It’s almost as if she has a vendetta against them. She sees men as meal tickets, nothing more. She knows how to play a man. She pulls you into her web then controls you.”
Theunis is now desperate to put things right with his family. “I was at home last night and Primrose and I talked. She’s still angry and hurt but I was allowed to stay. It will take time but my family is most important in my life.”
Grey-haired Theunis has now split from Khanyi. “If she were a better person she could have walked a path with me,” he says. “But now there will be no more fast cars, fast planes or fast cash.”

What do you think? Here’s the video…

Khanyi Mbau‘s Work Up On It Video made its debut on LIVE last Friday and it got Tweet-Tongues wagging. I think she worked hard on it and deserves props for the effort. It’s only the make up I have a problem with… Video’s good and the song is nice!
and a few stills from the shoot.

And what’s a Khanyi Mbau video without the Lambo!
Looking forward to hearing your thoughts on the video.
I thought I’d see it on her website but nope, months after we wrote of its launch, there’s nothing going on over there and even her TV show videos aren’t available anymore. *shrug*
Share

Thuli Madonsela Public Protector for the Republic of South Africa

Subscribe
Login
Please login to comment
0 Comments
Inline Feedbacks
View all comments
© Copyright 2020, African Millionaires and Entrepreneurs. All Rights Reserved https://africanmillionaire.net, its sponsors, contributors and advertisers disclaim all liability for any loss, damage, injury or expense that might arise from the use of, or reliance upon, the services contained herein.
error: Content is protected !!
wpDiscuz