Leo Igwe (born July 26, 1970) is a Nigerian human rights advocate and humanist. Igwe is a former Western and Southern African representative of the International Humanist and Ethical Union, and has specialized in campaigning against and documenting the impacts of child witchcraft accusations. He is currently performing research on the topic as a PhD candidate at the Bayreuth International School of African Studies at the University of Bayreuth in Germany, having earned a graduate degree in Philosophy from the University of Calabar in Nigeria. Igwe’s human rights advocacy has brought him into conflict with high-profile witchcraft believers, such as Liberty Foundation Gospel Ministries, because of his criticism of what he describes as their role in the violence and child abandonment that sometimes result from accusations of witchcraft. His human rights fieldwork has led to his arrest on several occasions in Nigeria. Igwe has held leadership roles in the Nigerian Humanist Movement, Atheist Alliance International, and the Center For Inquiry—Nigeria. In 2012, Igwe was appointed as a Research Fellow of the James Randi Educational Foundation, where he continues working toward the goal of responding to what he sees as the deleterious effects of superstition, advancing skepticism throughout Africa and around the world. In 2014, Igwe was chosen as a laureate of the International Academy of Humanism.

Igwe was raised in southeastern Nigeria, and describes his household as being strictly Catholic in the midst of a “highly superstitious community,” according to an interview in the Gold Coast Bulletin. At age twelve, Igwe entered the seminary, beginning to study for the Catholic priesthood, but later was confused by conflicting beliefs between Christian theology and the beliefs in witches and wizards that are “entrenched in Nigerian society.” After a period of research and internal conflict due to doubts about the “odd blend of tribalism and fundamentalist Christianity he believes is stunting African development,” a 24-year-old Igwe resigned from the seminary and relocated to Ibadan, Nigeria.

Igwe was influenced to become a humanist activist through the work of Paul Kurtz, whom he read through magazines published by the Center for Inquiry.

Igwe is listed as a Junior Fellow for the Bayreuth International Graduate School of African Studies, where his project is a case study of witchcraft accusation in northern Ghana.

In a Fall 2000 article in the quarterly journal Free Inquiry, Igwe enumerated different ways in which religious extremists in Nigeria have co-opted the local government and used it to enforce religious codes of law, hindering the upholding of human rights in those areas.

In 2008, a BBC documentary, Saving Africa’s Witch Children, featured an appearance by Igwe, as one of the primary subjects was “witch hunter Helen Ukpabio.” The documentary detailed reported “terrible crimes committed against children accused of witchcraft,” and premiered as an HBO feature in 2010. The documentary also follows the efforts of Sam Itauma, a human rights activist and founder of the Child Rights and Rehabilitation Network (CRARN) who offers shelter and protection to children who have been abused or abandoned, and Gary Foxcroft, who founded Stepping Stones Nigeria, a UK registered charity.

In 2009, Igwe represented the International Humanist and Ethical Union at the African Commission on Human and Peoples’ Rights in Banjul, Gambia, where he spoke out on the IHEU’s behalf against caste-based discrimination in Africa. In his talk, Igwe brought attention to discrimination against the Osu, a group of people perceived by some to be of lower class, who Igwe says “continue to suffer discrimination and indignity particularly in the areas of marriage and family, right to own property and inheritance, access to land, political rights and representation, education, development, infrastructure and distribution of basic amenities.”

In 2010, according to a release by the European Humanist Federation (EHF), Igwe’s home was invaded by soldiers and police officers “following a fictitious murder charge,” which was allegedly brought on by a man that Igwe had attempted to have prosecuted for allegedly committing sexual crimes against a 10-year-old girl in 2006. According to the report, Igwe had been arrested three times since beginning work on the rape case, as a result of allegedly malicious petitions, prompting David Pollock of the EHF to write to then Vice-President of Nigeria, Goodluck Jonathan, on Igwe’s behalf.

According to the EHF, later in August 2010 Igwe’s home and family were attacked when two unidentified men assaulted and blindfolded Igwe’s father, causing “extensive injuries to his face and head,” and resulting in the elder Igwe having to have his eye surgically removed. The case has been taken up by Amnesty International, after police reportedly refused to open an investigation.

On January 11, 2011, while attempting to rescue two children who were victims of witchcraft accusation in Uyo Akwa State in Southern Nigeria, Igwe was “imprisoned and beaten by police,” in an effort, according to Sahara Reporters, New York City, by the state governor Godswill Akpabio to begin “clamping down on activists involved in the rescue of children accused of witchcraft.” Igwe was later released without charge, according to Gary Foxcroft of Stepping Stones Nigeria, and “in good spirits.”

On February 11, 2014, Igwe was chosen as a laureate of the International Academy of Humanism.

Igwe’s activism against witchcraft accusation has included lobbying for the enforcement of a law in Nigeria that prohibits accusing children of witchcraft, which has led to conflict with Pentecostal group Liberty Foundation Gospel Ministries and in particular Pastor Helen Ukpabio, who has been criticized by Igwe and others, according to a New York Times article, for her teachings “having contributed to the torture or abandonment of thousands of Nigerian children — including infants and toddlers — suspected of being witches and warlocks.”

On July 29, 2009, Igwe was scheduled to speak at a meeting in Calabar, Nigeria, “condemning the abandonment, torture and killing of children alleged to be witches.” As he was about to deliver his talk, members of the Liberty Gospel Church, more than 150 people, invaded the meeting and attacked Igwe, who was “beaten and robbed, relieved of his camera, money and mobile phone before managing to escape to a nearby police station to seek help.” Portions of the altercation were captured on film.

After the attack, the leader of Liberty Gospel Church, pastor Helen Ukpabio, sued the state government, as well as several critics, including Igwe, seeking 2 billion naira (about $13 million USD, 2010) and an “order of perpetual injunction,” restraining her critics’ speech from further criticizing her work. Ukpabio’s application, which followed after a reported attack on Igwe by more than 150 alleged followers of Ukpabio in Calabar, Nigeria, at a child rights conference organized by a local humanist group where Igwe was scheduled to speak in July 2009, was later dismissed by Justice P.J. Nneke at the Federal High Court in Calabar.

Responding to criticism by Igwe and other activists, Ukpabio told New York Timesreporter Mark Oppenheimer that “her filmic depictions of possessed children, gathering by moonlight to devour human flesh” (as seen in her film End of the Wicked) were not meant to be taken literally, and stated, according to Oppenheimer, that the BBC documentary Saving Africa’s Children “exaggerates or invents the problem of child abandonment.” According to Oppenheimer, “Asked how she could be so sure, she said, ‘because I am an African!’ In Africa, she said, ‘family ties are too strong to have a child on the street.'” 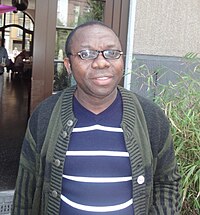 Igwe’s role as coordinator of the Nigerian Humanist Movement led to his being awarded the Freidenker’s Award for an outstanding contribution to world atheism during the 2005 Stars of Freethought Convention, hosted by Atheist Alliance International and Atheists United. In addition to founding the Nigerian Humanist Movement, Igwe was also a main organizer and presenter in 2007 at the first international humanist conference in Sub-Saharan Africa.

Igwe has also served on the board of directors of Atheist Alliance International, where he facilitated collaboration between AAI and the Nigerian Humanist Movement, resulting in the NHM receiving both the AAI International Freidenker Award and the AAI Community Cooperation Award.

In June 2009, as Director of the Center For Inquiry–Nigeria, Igwe was interviewed on the BBC World Service about the Center’s efforts to raise awareness about violence and neglect resulting from witchcraft belief, both in the name of its practice and resulting from fear of magic.

In 2012, Igwe wrote A Manifesto for a Skeptical Africa, which received endorsements from multiple public activists in Africa, as well as skeptical endorsers around the world.

Igwe presented a poster at the Sixth World Skeptics Congress (May 18–20, 2012) in Berlin, Germany, with graphic accounts of the trials that he and many of his supporters have faced in Africa while protesting the persecution and killing of children and minorities, and the failures on the part of law enforcement and religious leaders to challenge such atrocities.

On July 12, 2012, Igwe participated in a panel discussion at The Amaz!ng Meeting (TAM) 2012, “From Witch-burning to God-men: Supporting Skepticism Around the World.” Igwe’s presentation addressed the issue of poverty driving both the supply of and demand for self-styled exorcists, whom Igwe says preys on desperate communities and results in the abandonment or neglect of children. With panelist Eran Segev (then-President, Australian Skeptics) and moderator Brian Thompson (Outreach Director, JREF), Igwe discussed his efforts in human rights advocacy and the deleterious effects of superstition and witchcraft accusation in Nigeria, Ghana, and Malawi, as well as drawing public attention to the activities of witch hunters.

In October 2012, Igwe was appointed as a Research Fellow of the James Randi Educational Foundation (JREF), a skeptical nonprofit organization founded by magician and skeptic, James Randi. Randi said of the appointment, “We at the JREF are proud to work with Mr. Leo Igwe in fighting deadly misinformation in Africa, and around the world,” adding that the JREF’s mission “fits in perfectly with Mr. Igwe’s very important work.”

In 2013, at the JREF’s The Amaz!ng Meeting (TAM) 2013 in July 2013, Igwe spoke on a panel on “Supporting Skepticism Around the World.” While attending the conference, Igwe gave an interview to Christopher Brown from the Meet the Skeptics podcast, during which Igwe provided a description of three tests used to determine whether a person is “guilty” of practicing witchcraft. Each of the three tests are heavily biased against the accused and include the use of the randomness of nature (chickens or crocodiles) or the laws of physics (brooms).

The chicken test involves the candidate providing a few chickens to a diviner. The diviner ceremoniously beheads the chickens and watches how the decapitated animals fall. If the chickens land facing the sky, the suspect is innocent; but if they fall facing the ground, the accused is guilty.

The crocodile test is a simple one in which the accused is thrown into a river in which crocodiles are known to live. The suspect is guilty if attacked and eaten. This test is supposedly no longer in use. Igwe suspects that this may be due to over-hunting of crocodiles in the locations where the tests were performed.

The broom test uses the laws of physics to put the accused at a distinct disadvantage. The suspect is seated upon an small seat which provides very little support or balance. After some ritual actions, the bristle ends of two brooms are pushed against the front of the suspect’s neck. If the brooms separate, or rather if the potential witch is able to remain upright, then the suspect is innocent. If the brooms do not separate, and the accused is pushed from the seat, the suspect is guilty.