Nkechi Justina Nwaogu (born 29 May 1956) is a Nigerian senator who represents the People’s Democratic Party in Abia State. She became a senator in 2003.

Nkechi Justina Nwaogu was born in 1956. She received an MSC Management (Finance) 1984, Post Graduate Diploma, Management Studies in 1981 and a Diploma in PRTG Management in 1979. 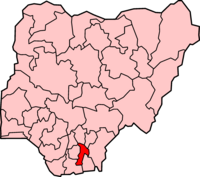 A former banker, Senator Nkechi was made chair of the Senate Committee on Banking, Insurance and other Financial Institutions. In this position, she pledged support for Scholarship, Interest Free Micro-Credit and Skills Acquisition Schemes. She was reelected in the April 2011 elections.

In December 2011 Nwaogu’s April election was overturned by a Nigerian Court of Appeals.